Frost Clime threatens the Wizard Enclave. Sorcerers and their servants, shape-shifting wyre, have stolen into the city of Tres Lucerna, home to the Enclave.

Alstera is the greatest of the young wizards in the Enclave; she’s treated like the least. 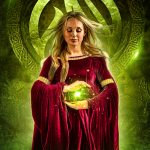 She’s desperate to join the war against Frost Clime, but the chief wizards refuse. Denied her wish, Alstera explores other ways to increase power.

A Fae disguised in glamour courts her aunt Camisse … but for what purpose? Does Camisee have latent power that the Fae will control? Will a forbidden linkage unlock her magic?

And what of Alstera’s cousins, who have joined an outland wizard’s circle? They dabble in twisted magic.

Danger walks the streets of Tres Lucerna, yet the chief wizards refuse to acknowledge it. Rumors fly … of a taboo nexus of power, of vile blood spells, and of enemy shape-shifters in the heart of the Wizard Enclave.

Then wizards are murdered.

A grim future awaits any wizard lured into forbidden magic.

And a grimmer death awaits wizards caught by the shifters.

Can Alstera escape the spidery lure of corrupted magic? Or will she become the shifters’ next target?

A dark fantasy of twisted magic, Weave a Wizardry Web by Remi Black is first in the Fae Mark’d Wizard series. Dream a Deadly Dream and Sing a Graveyard Song continue the series.