Join the Newsletter: Head off on this link

the bundled fantasy trilogy in the Fae Mark’d World

including To Wield the Wind, To Charm the Wind, and To Curse the Air

that seeks to defeat the wizard Orielle, look no further than Spells of Air. 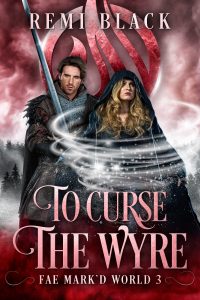 To Curse the Wyre

Hunter. Hunted. Who is who?

The sorceress and her servants, the shifter wyre, seek to destroy Orielle’s allies in the Wilding. Orielle has gathered Dark Fae and Rhoghieri to defeat them.

She rides with the Dark Fae Lord Skull and Lady Bone—but can she trust them?

To Charm the Wind

When Haven isn’t a Sanctuary—

When the untried wizard Orielle enters the Wilding on her journey to Iscleft Haven, she expects threats from bears and mountain lions, vipers and hornets.

She certainly doesn’t expect the creatures of legend: wraiths and gobbers, shape-shifting wyre, and the Dark Fae called the Kyrgy.

To Wield the Wind

On a mission for the Wizard Enclave, Orielle ventures into the Wilding, a strange frontier filled with magical creatures. There she discovers sprites and wraiths, gobbers and wyre.

All view her as prey.

bundles these three novellas together.

“Wizard against sorcerer.  Fae against dragon.  Wyre against Rhoghieri.”

In the recently-revived war between wizards and sorcerers, the Enclave wizards enlist the aid of Rhoghieri, wielders of the four base elements who live in Havens.  The sorcerers have enslaved wyre, animal shifters who became outcasts when the wizards declared them anathema.

The Faeron, who withdrew when the dragons were defeated and nearly extinguished from the world, have returned to an uneasy alliance with the wizards—for the dragons did not die out centuries ago.  Those nearly-mythic creatures are searching for a way to return so they can wreck vengeance on the Faeron and the wizards who exiled them.

View the Trailer for Web here.  Purchase at the link.

Frost Clime threatens the Wizard Enclave. Sorcerers and their servants, shape-shifting wyre, have stolen into the city of Tres Lucerna, home to the Enclave.

Alstera is the greatest of the young wizards in the Enclave; she’s treated like the least.

She’s desperate to join the war against Frost Clime, but the chief wizards refuse. Denied her wish, Alstera explores other ways to increase power.

A Fae disguised in glamour courts her aunt Camisse … but for what purpose? Does Camisee have latent power that the Fae will control? Will a forbidden linkage unlock her magic?

And what of Alstera’s cousins, who have joined an outland wizard’s circle? They dabble in twisted magic.

Danger walks the streets of Tres Lucerna, yet the chief wizards refuse to acknowledge it. Rumors fly … of a taboo nexus of power, of vile blood spells, and of enemy shape-shifters in the heart of the Wizard Enclave.

Then wizards are murdered.

A grim future awaits any wizard lured into forbidden magic.

And a grimmer death awaits wizards caught by the shifters.

Can Alstera escape the spidery lure of corrupted magic? Or will she become the shifters’ next target?

The Fae Mark’d Wizard series continues with Dream a Deadly Dream and Sing a Graveyard Song.

Dark Fantasy. Mysterious spells. A conspiracy to assassinate. Forbidden blood magic. Can Alstera free Cherai of the spell? Or will sorcery spin a lethal web to enslave them?

These three novels are bundled together as Tangled Spells.

Coming:  Kindle a Fae’s Wrath (at the very rough stage)

Wizard Enclave Basic Infocan be found at this link.

The first book in the Fae Mark’d Wizard series, available exclusively on Amazon

Stories in the Works

1st book To Wield the Wind  published! Click for info.

2nd Book: To Charm the Wind (see progress chart above)

Spells of Water featuring Inkeri and the baron Bois d’Argent

The months are 32 days, with each week having eight days.

8 Moon Phases through a Single Month

22 Hours in each Day

Join Remi Black’s Quarterly Newsletter. When you join, you will receive advance notice of publications and offers for freebies, such as a free copy of To Wield the Wind, all just for signing up. ClickTHISlink!

& fantasies in an alternate medieval world

To prevent spamming, only one submission is permitted.  Thank you for submitting.