Start 2020 off by starting that novel you’ve been neglecting. 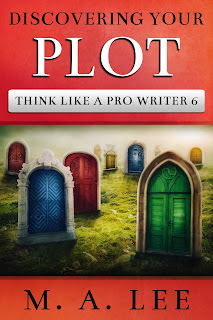 Examining the plot necessities and the major structures, Lee lands firmly on writing ground by advising all writers to use the Archetypal Story Pattern, which she details in Discovering Plot.

Plot It:  Plotter vs. Pantster

Should I or shouldn’t I?  Plot, I mean.  Here’s the question every writer struggles with.

Should I plot this sucker?  Or should I follow where the idea leads me?

Should I just launch into writing and see where it takes me?

Or should I plot out every scene and sequel, checking all the boxes?

END_OF_DOCUMENT_TOKEN_TO_BE_REPLACED

More on Plot as the One Guiding Decision

A Continuation of the Previous Blog — which was shorter 😉 .

Detailed Look at the 7 Types of Plot

The title of this chapter in Think like a Pro is “One Guiding Decision :: Plot It”, and plot is truly the guiding decision for any writing.

While many plot structures abound (and several are discussed later in the Think/Pro chapter), it is the 7 Plot Types that will give the KEY that every writer needs to use to unlock story.

That KEY is coming, I promise, but first let’s look at the three required elements for each of the 7 Plot Types.

END_OF_DOCUMENT_TOKEN_TO_BE_REPLACED

The scariest woman in all literature.

Jurassic Park, in all its iterations.

What do the items in this oddly-matched list have in common?

These stories all have origins with the ancient Greeks and Romans.

Sitting around fires after a day of hunting and gathering, the first writers developed techniques to influence their audiences.

Those techniques have thousands of years of use and still hold true for capturing audiences.

The ancient Greeks (and Romans) of classical antiquity viewed the stories and dramas that were enduring.  And just like writers today, they searched and defined and classified the best techniques to create writings that pleased their audiences.

These old geeky Greeks laid the foundations.  Many of their techniques are still in use. Ideas original to them are re-packaged as glittery infographics and Wham-Pow webinars and three-point seminars with exclusive insights to Buy Now!

Old Geeky Greeks: Write Stories with Ancient Techinques presents such ideas as the Blood Tragedy and dulce etutile in a clear, organized method for writers who want to write rather than invest hours getting three snippets of information.

Chapters in OGG cover understanding characters to the five stages that established the modern protagonist from the ancient hero.  Aristotle’s requirements for plot precede a survey of the oldest plot formula, the Blood (or Revenge) Tragedy.  Concepts such as in medias res and dulce et utile can help writers solve sticky problems and develop new ideas.

Old Geeky Greeks (and Romans) looked at successful plays and other story-telling methods to determine what influenced the audience.

Writers today are still searching for the answers to these questions.

The bright minds of Classical Antiquity first explored these questions.  Their answers are applicable even in the age of the internet, open-source software, special effects, and infographics.

Aristotle, Seneca, Plato, Horace, and many other ancient geeks have their ideas matched to Harry Potter, Avatar, Last of the Mohicans, and Shakespeare.

Whether we’re writing novels or plays, blogs or non-fiction, poems and songs, Old Geeky Greeks (written by M.A. Lee and Emily R. Dunn) is a seminar in 28,000 words, just published on Amazon Kindle.

John Singer Sargent’s sketch for his sculpture of Perseus

with Medusa’s head, provides the cover art for OGG.