Why is Good Friday “Good”?

Good Friday is all about Saying “No” to Opportunities.

We say “No” to more and more opportunities every day.

Whether those opportunities are for our spiritual well-being or for our intellectual & physical improvement, we just say “No”.

The Sanhedrin Court said “No” to Christ because He was not what they expected the Messiah would be.

Pontius Pilate said “No” to Christ because he didn’t want to go against the crowd.

How many times do we say “No” to Christ-given opportunities because they demand too much of a sacrifice?

We often say “No” because the opportunity is not what we envisioned it would be.  It doesn’t match to our expectations.

It opens all these doors and windows.  It might even take the roof off our prospects.  But we shake our heads and move on.

Christ was not what the Sanhedrin Court expected the Messiah would be.

1st, Christ seemed to be from Nazareth.

The Sanhedrin Court had the same expectation as Nathaniel did in John 1:46, “Can any good thing come from Nazareth?”

The Messiah was supposed to be from Bethlehem.  Christ was born there.  Apparently, no one in the Court took the trouble to ask where He was born.

2nd, Christ didn’t “look” the way the Messiah should look.

A common man, He walked about with no great “show” of Himself or His plans.  He had no great mansion, no great wealth backing him, no army to lead a revolution against the Romans.

3rd, Christ was never going to give the Sanhedrin Court what they expected the Messiah to give.

He never said He would re-create the glorious nation of Israel, but instead He talks about the kingdom of Heaven and a revolution of the soul.

The people of Jerusalem would have to continue to live under that pagan Rome government rather than rule over themselves.   Conveniently, the Court rabbis forgot how badly self-rule of Israel had gone before.

Under cover of darkness, the Sanhedrin Court uses lying witnesses to stack the evidence against Christ.  Then, to ensure His death, they send Him to the head of the Roman government in Jerusalem by lying about Christ’s supposed treason against Rome.[1]

The Sanhedrin Court had to lie to shut the door on the opportunity Christ offered.

We do the same.

We lie about an opportunity before us so it is easier to turn it down.  That opportunity doesn’t offer our little checklist, so we reject it completely.

Only when that opportunity is gone do we realize how much MORE it is.

We say “No” because the opportunity before us goes against the crowd.

Pontius Pilate was the political and military leader of Rome in Jerusalem.  When he interrogated Christ, he didn’t get the admission of treason that he needed to move forward.  But he couldn’t send Christ back to the Sanhedrin Court;  that would upset the 50-plus rabbis.

He passed the buck over to Herod.  Herod had a little fun with mockery then sent him back.

So he decides a little torture might appease the Court crowd.

Pontius Pilate says, “You brought me this man as one who was inciting the people to rebellion. I have examined him in your presence and have found no basis for your charges against him.” (Luke 23:14)

Three times Pilate offers the crowd to punish Christ then release Him.  Do they want Christ, bloody and beaten, or Barabbas, a criminal revolutionary?

The crowd, for whatever reason, picks Barabbas, not Christ (whom they had celebrated six days before when He entered Jerusalem).

Mob Mentality is a dangerous thing.

How many times have we rejected an opportunity because so many people around us claimed it wasn’t for us?  Or claimed it was the wrong thing to do?

Or conversely, as we hesitate, caught between what we know is right and is wrong, people clamor around for us to choose the wrong thing.

Does the opportunity require moving or changing jobs?  Does it need us to step out of the norm?  Or does it require standing alone rather than with the crowd?

Why shouldn’t we grab that opportunity?  Because they will be inconvenienced?

We say “No” because the opportunity requires too much of a sacrifice.

Christ is rejected.  Mocked and reviled.  Scourged with a whip that slashes open His flesh.

Nails driven into His hands and feet.  Hung from a cross.  His weight pulls down on each nail.

With His arms up and out, it’s difficult to breathe.  A sword pierces His side.

And we reject an opportunity because it would inconvenience us.  It’s harder than we’re used to.

We would need to change our schedule or our plans.  We have to take a paycut now, even knowing we’ll make more later.

That opportunity might require us to leave our little circle and be among strangers.  Or use skills we’re uncomfortable with.  Or take a stand when we’d rather hide in silence.

Only One Reason to Reject an Opportunity

The only reason to reject an opportunity is if we know, going in, that it will damage 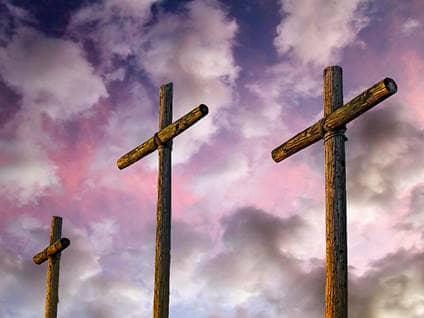 our relationship with Christ?

And who’s involved in our relationship with Christ?  Him and us.

If only we could be as steadfast.

And Good Friday is called “Good” because—after all we did to Him—he remains steadfast and loving, forgiving and saving, caring for us.

Consider the ways we reject the small and large opportunities that God gives us.

Step away from expectations.

Ignore what the crowd roars.

“For I know the plans I have for you,” declares the LORD, “plans to prosper you and not to harm you, plans to give you hope and a future. (Jeremiah 29:11)