It’s the Into Death series with Isabella Newcombe.

Portrait with Death continues with Isabella while introducing two new characters to the series.

Flick Sherborne, intrepid photographer. Flick is brand-new to this series, and she quite surprised me when she appeared.

DI Michael Wainwright of Scotland Yard. DI Wainwright first appeared in Christmas with Death. He has a stronger role now. 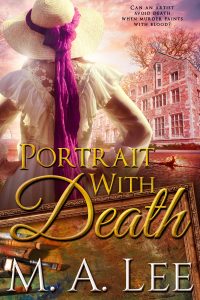 What is Portrait with Death?

Another bit with Isabella

A bit more with Flick

Meet Detective Inspector Michael Wainwright, sent by Scotland Yard to solve the murder … although someone else is on his mind.

that the Fae Mark’d wizard Alstera expects in Sing a Graveyard Song.

are nothing compared to a blood-drinking monster.

With her powers still shackled for crimes against wizardry, Alstera reaches a snow-smothered village being attacked by a death walker. The re-animated corpse drinks blood to exist. To fight the death-walker, Alstera relies primitive and forbidden blood-magic.

How many lives will the death walker take before Alstera finds the way to destroy it?

Will Alstera cross the tenuous barrier that separates wizardry from foul sorcery?

The dark fantasy Sing a Graveyard Song continues the grim story of twisted magic and foul sorcery and Alstera, walking the silvery thread that separates them. Third in the Fae Mark’d Wizard series, Grave follows Weave a Wizardry Web and Dream a Deadly Dream. Although each novel is a complete story, readers will have a richer experience if they read all three in order.