The third Fantasy in an Alternate medieval World,

part of the Seasons in Sansward

Just as their cover is blown, the spies Rolf and Catal stumble upon a greater secret:  the Kaerrefiorne, a blood-fed globe that will connect every Gitane Witch.  They steal the last orb that will complete the connection and escape into snow-smothered Arlas.

When Catal is severely wounded, two clerics at a Protectorate temple outpost become the Frenc spies only hope.  Legeeta and Niijai, a Green mage with unschooled powers, do not know they harbor Frenc spies.

Rolf takes the orb to the border to keep it from the pursuing Watrani.  He is not an hour from the temple when the troop arrives.

With the Watrani is Keipven, a WitchMaster.  He recognizes Niijai’s magic as a potent replacement for the orb.  If he can bend her power to his will, his own puissance increases.  If he can twist her to sorcery, the Gitane become

Will Catal be discovered and killed as a spy? that much stronger against the Mages.  If he can neither control her nor twist her, then he will kill her.

Will Rolf stumble into the Watrani when he returns?

And will Niijai be destroyed by Keipven, alive and enslaved to his plans or bloody and dead on the snowy fields of Arlas?

in the Season in Sansward Quarternary

The Green mage Saisha and Hethan, a master swordsman, find themselves entangled in a dark dame’s spells.

They are drawn together at a harvest festival.  They free a wounded Prica, a man cursed in the shape of a wolf.  Yet neither expects to see the other ever again.

Yet when Hethan returns to his home keep, a dark dame ensorcels him to track down a mage.  She wants to reincarnate herself in the mage’s younger body.

The dame’s dark spells bring them back together.  Can Saisha disentangle Hethan from the sorcery?  Or will she be trapped and turned into a wraith while the dark dame inhabits her body? 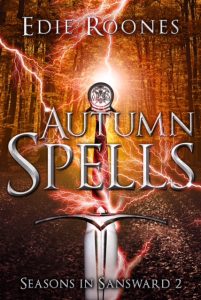